September 14, 2015
In my last post, I asked everyone to get involved in a survey about language (You're still welcome to do the survey before reading this!). Well... I lied a little bit. Actually, it WAS about language, but not in the way it sounds; Not about spelling and grammar and syntax. It was about what is known as 'person-first language'.

Although not many people might have heard of the term, it is pretty self-explanatory once you hear it. It is a form of the use of our language that puts the 'person' before an 'identity' in order to emphasise the individuality of people with disabilities. 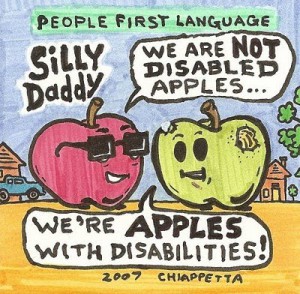 Instead of saying "X is blind", you might say "X has a visual impairment"; And instead of "Y is schizophrenic", you'd say "Y has schizophrenia".

This is opposite to what is called the 'identity-first language', that puts the identity before the person in language, e.g. "Z is disabled".

In my survey, I used terms like "an autistic boy", "a victim of stroke", "the disabled children", and even "normal children". Advocates of person-first language urge for the use of terms that treat individuals as anyone else, without diminishing their individuality, character, or abilities as people. So, aside from actually putting the 'person' before the disability in a sentence (i.e. a person with disability), person-first language advocates seek to educate people to stop using terms that seem to weaken the person (e.g., "victim") or to alienate them (e.g., "abnormal").

Person-first language, at first glance, seems like a more respectful way of referring to those with disabilities, and indeed, a lot of government and medical institutions advocate for its use. But as with anything else, it's not that easy.

Some disability communities actually prefer identity-first language because they celebrate their disability as a part of their identity, and there is no shame to it whatsoever. Some consider person-first language as having the opposite effect to what it's advocating as well. For example, by putting the disability after the person, and thus structuring the sentence to mean that "a person just happens to have ...", it can be seen as treating the disability as something negative, something to be avoided. That is, if having a disability is nothing to be ashamed of, there should be no need to tip toe around the word, as if it's a negative thing to say.

Also, some people consider identity-first language to be more accurate. Someone who is disabled isn't disabled by their physicality, but more so by society. For example, if a person in a wheelchair cannot access a building that doesn't have a ramp, that person is disabled by the architecture of the building, not by their own physical functions. In this respect, saying "X is disabled" would be accurate.

The survey I asked for your involvement in was quite interesting. Although there weren't enough responses to actually analyse the data, most people didn't seem to recognise the identity-first or person-first language being used. However, most, if not everyone, picked up on the word "normal" and suggested a replacement word. Which is actually great, because while person-first and identity-first language advocates have conflicting views regarding the order of words and what it means to say "disabled" and so on, I think it should go without saying that ableist terms such as "normal/abnormal" are not an acceptable way to refer to anybody.

There is no right or wrong here regarding person- or identity-first language, though, at least in my opinion. Most researchers, academics, and disability communities suggest that we should just ask the person what they prefer, if we don't know what kind of language to use. That sounds respectful enough, but doesn't that simultaneously alienate them, as if they need a special term to be referred to by, for they'll be so offended otherwise? Perhaps I'm going a bit too far.

I'm probably just going to use my judgment when talking or referring to people with disabilities, and depending on the situation and the person I'm speaking to, my language would have to change slightly, just because it never hurts to be considerate.

I'm curious what you think, though. As a person with or without disabilities, which (person-first or identity-first) do you prefer?
By Danielle Psychology Survey