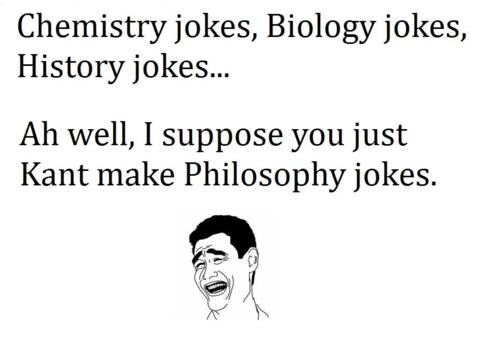 Descartes is sitting in a bar, having a drink. The bartender asks him if he would like another. "I think not," he says ... and disappears.


Jean-Paul Sartre is sitting at a French cafe, revising his draft of Being and Nothingness. He says to the waitress, "I'd like a cup of coffee, please, with no cream." The waitress replies, "I'm sorry, monsieur, but we're out of cream. How about with no milk?"


Dean, to the physics department: "Why do I always have to give you guys so much money, for laboratories and expensive equipment and stuff? Why couldn't you be more like the math department - all they need is pencils, paper, and waste-paper baskets. Or even better, like the philosophy department. All they need are pencils and paper."

A boy is about to go on his first date, and his father gives him the following advice: "If you ever don't know what to talk about, just remember the three F's: food, family, and philosophy. You can always start a conversation about one of those subjects."
The boy picks up his date and they go to a soda fountain. Ice cream sodas in front of them, they stare at each other for a long time, as the boy's nervousness builds. He remembers his father's advice, and chooses the first topic. He asks the girl: "Do you like potato pancakes?" She says "No," and the silence returns.
After a few more uncomfortable minutes, the boy thinks of his father's suggestion and turns to the second item on the list. He asks, "Do you have a brother?" The girl says "No," and there is silence once again.
The boy then plays his last card. He thinks of his father's advice and asks the girl: "If you had a brother, would he like potato pancakes?"

Overheard in 18th century England: "Did you hear that George Berkeley died? His girlfriend stopped seeing him."
Humour Philosophy

Moral relativism ( Source ) Taken from  tylermittan.tumblr.com There is a very strong draw to moral relativism in recent years. I will discuss the reasons why people are drawn to it but first I’d like to talk about the problems of moral relativism. There are two different kinds of relativism; cultural & individual. Cultural relativism is when cultures determine what is moral. What may be moral in American culture will not always be moral in Russian culture. Regardless, it is the culture that determines the morality of the people. Similarly, individual relativism is when individuals choose or determine their own morality. For instance, a pacifist will be said to have a different morality than that of a neoconservative. Either way, both would be considered moral beings. Both types of relativism suffer from the same problems. The first problem is the problem of infallibility. There may be a slight tendency to equate a disbelief in morality with moral relativism but that’s no